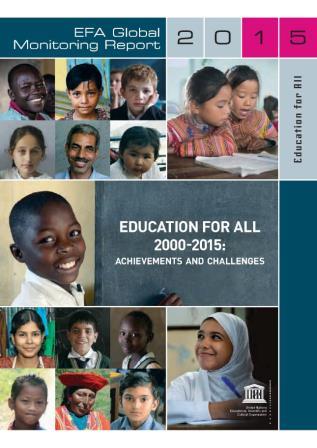 The 2015 Report provides a complete assessment of progress since 2000 towards the target date for reaching the Dakar Framework’s goals. It takes stock of whether the world achieved the EFA goals and stakeholders upheld their commitments. It explains possible determinants of the pace of progress. Finally, it identifies key lessons for shaping the post-2015 global education agenda. 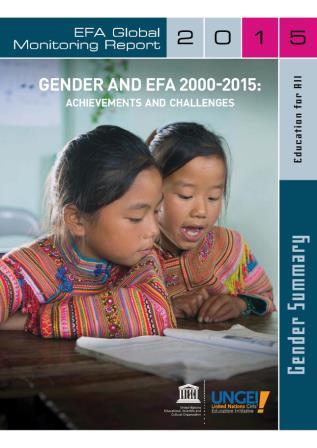 This Gender Report provides detailed evidence of how much has been achieved in the past 15 years towards gender parity and reducing all forms of gender inequalities in education but also where considerable – some quite intractable – challenges remain. It highlights notable progress in gender parity in primary and secondary education, particularly in South and West Asia, while underscoring the persistent barriers to achieving gender equality in education. The lack of progress in literacy among adult women is especially stark: in 2015 an estimated 481 million women, 15 years and over, lack basic literacy skills, 64% of the total number of those who are illiterate, a percentage virtually unchanged since 2000. The analyses and key messages in Gender and EFA 2000–2015 deserve careful scrutiny as the world embarks on a universal, integrated and even more ambitious sustainable development agenda in the years to come.