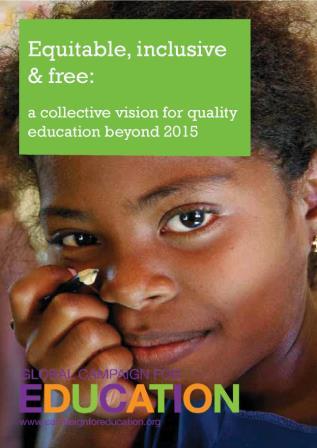 GCE believes that there must be a specific goal on education in a global post-2015 development framework, and continuation of the Education For All agenda after 2015, and that both must be grounded in a human rights perspective. Following a thorough consultative process with civil society coalitions and organisations, the Global Campaign for Education has produced a proposed education goal for education within the post-2015 development frameworks.

The fifth GEM Youth Report not only considers how accountability applies to, and can be applied by, young people, but also shares stories from notable young people around the world who are helping to hold their governments to account for quality, equitable education.

Only 44% of countries have made full legal commitments through international treaties to the cause of gender parity in education, according to this year’s Gender Review, published by the Global Education Monitoring (GEM) Report. This is the key finding of its sixth annual Review, which surveyed 189 States to assess whether they ensured that girls and women fully benefit from the right to education.

The Review, produced with the support of United Nations Girls’ Education Initiative (UNGEI), looks at the causes of slow progress towards gender equality in education, and how such issues may be addressed. Recalling countries’ legal commitments to the right to education for girls and women through international treaties, it focuses on three: the Convention on the Elimination of all Forms of Discrimination Against Women (CEDAW), the Convention against Discrimination in Education (CADE), and the International Covenant on Economic, Social and Cultural Rights (ICESCR).