GCE Statement on the Russian/Ukrainian conflict 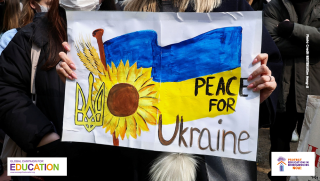 GCE Statement on the Russian/Ukrainian conflict

Through the recently launched Protect Education in Emergencies Now!, the Global Campaign for Education (GCE) calls for a diplomatic resolution to the escalating conflict in Ukraine; and the immediate and full protection of the human rights of the people of Ukraine;  including their right to education, as well as for the safety of education facilities and personnel to be guaranteed.

The world is witnessing a war, and the Ukrainians are suffering its consequences. In just a few days, over 500,000[1] Ukrainian refugees have crossed borders to seek safety in neighbouring countries.

As in many conflict-affected countries, in Ukraine, hospitals and schools have been the target of attacks. Since the beginning of the conflict in Eastern Ukraine and the temporary occupation of Crimea in 2014 and 2019, over 700 schools have been destroyed and thousands of children and youth’s right to education disrupted[2]. In 2020 over 500 schools were destroyed; since the occupation began on February 24th, 2022 at least six school facilities and a kindergarten have been shelled and two teachers killed. Over 350,000 children were left out of school following school closures in Eastern Ukraine[3]. These blatant violations of the right to education and the Safe Schools Declaration are unacceptable and alarming. Education must remain a safe sanctuary, forming and building sustainable and peaceful societies.

The Global Campaign for Education (GCE) reaffirms its conviction that all peoples have the right to self-determination through their agency and independence. In the strongest terms, the GCE rejects the Russian occupation of Ukraine in the same way we reject all occupations wherever they may exist, particularly the ongoing Israeli occupation of Palestine and Syrian and Yemen bleeding wounds. There is increasing fear in the world experiencing multiple systemic and social crises.

The GCE again reaffirms its conviction that open dialogue is necessary for peace and dispute resolution.

From this position, GCE reiterates its absolute rejection of any military occupation. Occupation is a means of oppression, deprivation, and dehumanisation. Wars destroy human lives, values, and infrastructure and affect both the moral and the physical aspects of society. While bombed bridges, schools, and hospitals can be physically fixed, the bridges of hope and communication between people are much more difficult to repair. The ruins of human values and the trauma of war carry far into future generations, reflecting all knowledge and value-building elements.

In this context, GCE calls on Russian Federation to immediately stop military aggression and calls on both parties to:

GCE also calls on the international community to: